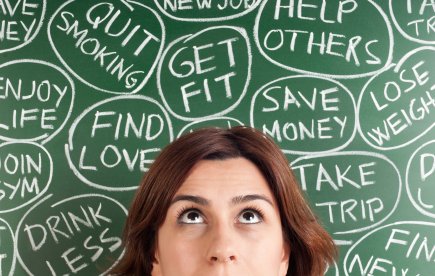 Many people make New Year’s resolutions and most do not keep them. Lose weight, quit smoking, change jobs, run a marathon….sound familiar? Every year people decide to improve their lives, and every year this intention fades. The original resolution is eventually forgotten, perhaps remembered again during the next New Year’s party but then the cycle is repeated, with most people never accomplishing their goal. In fact only 8% of people who make resolutions are able to keep them.

Why, you may ask? It is not that people are weak or do not have will-power. They simply make the mistake of relying on their will-power alone, which dismisses the dynamics of our psychology. This is a mistake, as the majority of our motivation is based on identity, effectiveness and positive rewards. These aspects must be addressed along the way. Without being fulfilled the identity simply gravitates to what has worked in the past, which is not the goal.
To change this, one must apply four specific factors that support one’s psychology. The goal then becomes a matter of identity and interest rather than something to do to get an end result. These factors are: Relating to others, having a tribe, breaking the goal down to smaller goals and having fun.
When I have helped my clients integrate these four factors into their efforts, they not only have achieved their goals but have improved their sense of self and have more influence and effectiveness in their lives. The following explains them in detail.

Factor one: Relating to others

Conversation is very powerful. It is actually the basis of our culture and how we define ourselves. People are constantly assessing, judging, and evaluating each other and themselves through language.

With this in mind, if one wants to accomplish a goal then one of the most powerful things a person can do is to tell others. Initially putting a goal out in conversation makes it become more real as one is, in a sense, defining who they are.

In addition, it is important to be inspiring. For initially the goal only existed in the conversation. If people are not inspired by the story, the conversation may be remembered for a day or two but will soon be forgotten. However, when a person tells others why they are doing something, people develop a much higher level of interest. For example, “I want to quit smoking” is not as significant or inspiring as “I want to quit-smoking so I can be around to see my grandchildren graduate college” The relatedness one has with others about the desire to see the success of their children or grandchildren, is a value most people can appreciate. The goal then becomes more significant to the listener as well as the speaker.

After piquing the interest of others, one then needs to be specific about what it is going to look like in accomplishing the goal. For example, perhaps someone is going to climb a mountain. They may tell people how high it is, where it is located and how many calories are required to get to the top. Perhaps there are specific routes, weather to consider, named glaciers to cross or the experience of someone who has done it before. Sharing specifics like this with others makes the goal become significant. It also begins to be a part of one’s identity.

In one’s efforts to tell everyone, people will begin to fall into several groups. Some people will be negative or not take the goal seriously. STAY AWAY! These people are to be avoided. If they cannot be avoided then simply do not discuss the goal with them. Others will not have any experience with the goal but will be supportive anyway because they see the immediate value in it. And the last group will have an intimate understanding of the goal as they are either doing it themselves or have already done so.

The last group is the pool of people from which to choose one’s tribe. I use the word “tribe” to emphasis that these people have a deeper connection to ones efforts in the goal. They will be familiar with the process and supportive of the efforts to accomplish the goal.

Gather these people together and meet with them regularly or join their group. They can bring inspiration. Some people may be a few steps ahead and can assure that the goal can be done, simply by discussing how far they have taken it. They have faced or are facing the same challenges, which bring certainty that things are going as they should, even if it feels unfamiliar and difficult.

If one is not putting the effort out that the goal requires, the group can hold them accountable, exposing the loss of integrity. With the group’s support there is no shame, just accountability. One’s integrity is then restored with action. Keeping the group closely in tune to one’s efforts makes it clear if a person is taking action on what they said they would. With this support a person then is able to approach their goal powerfully.

Finally the tribe will celebrate accomplishments in addition of being supportive in the failures. Through this, they will continually keep the possibility of the goal as a strong reality.

A good example of this is from my youth. As a young man in junior high, I was cool. I hung out with the other cool kids and we all liked each other because of the coolness. However, as we got into high school things started to change. It was not just being cool anymore but partying like rock stars, skipping school and even getting into trouble with the law. This was not for me. My goal was to go college and from what I could tell from these “cool” friends, none of them had this goal in mind. So I decide to find a new group of friends. I sought out several young guys that were like me in their ambition. Not only did they want to go to college but they had similar passions for exercise and achievement as I did. Our conversations just made sense and we enjoyed each other’s company. All the time we spent together working out, doing school work and going out on the weekends held much higher integrity for my goals than did my previous group of friends. It felt natural to be with them and yet we worked hard at everything we did. They were my tribe and through my association with them, I finished high school with great grades and went on to college.

Factor three: Breaking the goal down into smaller goals. 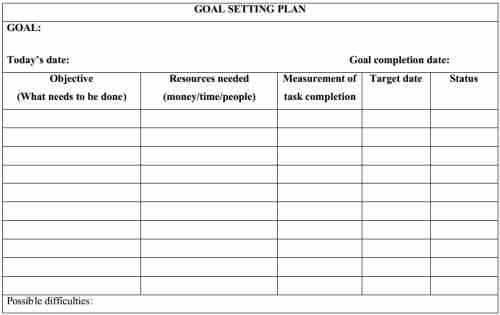 Once a person has clearly specified to others what the goal is and set up a group/tribe to help with the accountability and inspiration, the next step is to break the goal down into incremental smaller goals.

The reason for this is rather simple. The way that our minds work we have a sense of urgency about tasks that are attainable. However, if we have goals that are beyond our immediate reach, our minds want to give up on this effort as there are no immediate results to consider.

Therefore to motivate the mind into believing that it is achieving, large goals must be broken down into smaller goals. In this, there is satisfaction of accomplishment. Even though one has achieved very little compared to the overall goal, the mind feels satisfied that something has been accomplished. One feels effective and is enthusiastic to accomplish the sub-goal.

An example of this from another goal in my life is climbing Mt. Adams. Several years ago I decided to climb this mountain. Although a non-technical climb, I decided that if I was going to climb it, I was going to be in great shape. I then planned 17 weeks of training before the designated date of the climb. I scheduled a big hike or two each weekend in the Columbia River Gorge. I started off with trails that had 2400 ft. high elevation gains, then higher and higher, ending with trails that had up to 5000 ft. elevation gains. Then I repeated all of the trials with a full pack. After completing the last and highest trail I was ready.

The mountain climb was an exhilarating adventure. My body was in shape and I did not struggle. I was able to concentrate on the beauty and conversation instead of the physical challenge. I was able to enjoy every step because of all the previous small victories.

Each week of training was a goal and an adventure in itself. Completing each week’s goal was very satisfying. Each trail had a name and I took video of each start, my experience along the way, and my sense of accomplishment at the end.

Every goal can be broken down into sub goals like this. In doing so, our minds are satisfied with the accomplishment along the way, resulting in consistent effort and motivation. 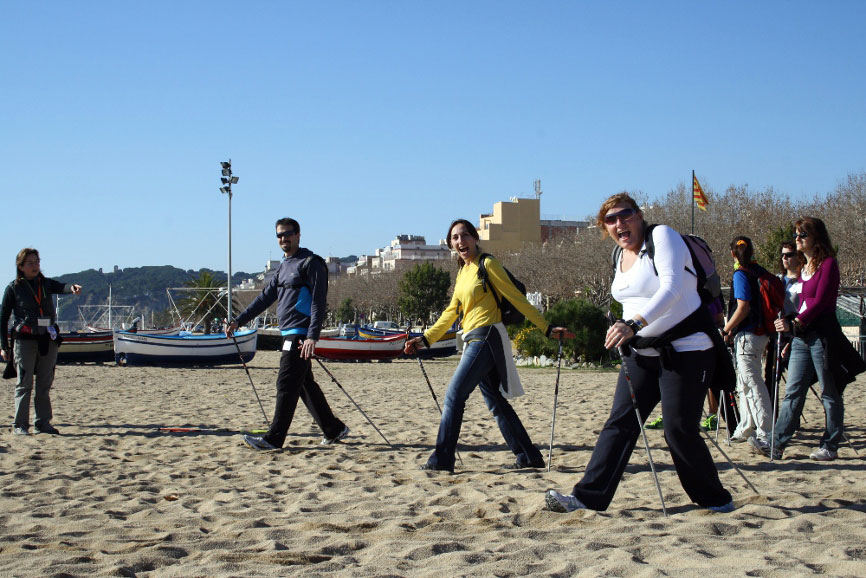 Nothing replaces the motivator of good old fashioned fun. People enjoy feeling good and if it is in the process of accomplishing a goal, so much better. Many people do not have this in mind when they try accomplishing a goal and they usually end up burning out.

During this time of the year I see many people who are out of shape following up on their New Year’s resolution and come to the gym. They hire a professional trainer and start going through the prescribed exercise regimen. They come to the gym usually two or three times more and then are never seen again.

I can guarantee that one of the factors that keep them from coming back is that they are not having fun. They like the idea of losing weight but do not care about being in the gym at all.

The gym may make them feel self-conscious. They may be concerned about how they look or how much exercise they are capable of doing compared to others. In addition, the challenge of adapting their body to more exercise than it is used to, is difficult. They are sore, feel self-conscious/awkward and do not have much influence. They do not return.

The solution, the same I tell my clients, is to have a good time while achieving a goal. In this case with the out of shape people, my suggestion is to take walks with friends that are also getting into shape (tribe), go dancing, take up hula hooping, tennis or swimming, whatever they like to do as fun. Being motivated with fun helps a person continue though challenge of their goals. This is essential for powerful success.

Now with these four factors in place, New Year’s resolutions are much easier to keep. Remember, using the technique of incorporating our psychology is the best and most effective way to accomplish a goal. We are not our will-power alone. Most of our capabilities of accomplishing goals come from: relating to others, having people support us, breaking the goal down into smaller goals and having fun. Include these four factors with your willpower and you can accomplish anything you want, including New Year’s resolutions. 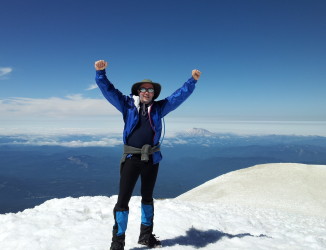